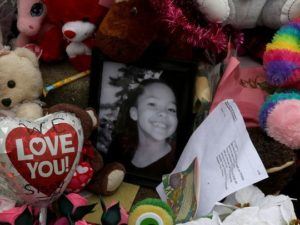 Of all the details and decisions Amber Caudell has had to make in the days since her daughter was fatally shot as she hid from a gunman who shot her father, there is one that was never difficult.

There was never a second thought that Alexandrea “Sissy” Thompson would be an organ donor, her mom said this week as she planned her 9-year-old’s upcoming visitation and funeral service this weekend.

“That was a no-brainer. She was so giving, so thoughtful. If she had been an adult, she would have been an organ donor,” said Caudell. “This, well this speaks to her character.”

But that’s about all Caudell is sure of these days, when sleep escapes her and words are difficult to come by and sentences harder to form.

Police are pushing for an arrest in the case that has galvanized many local ministers and neighborhood activists and has again shined a light on the issue of a pervasive no-snitch street culture that often hinders investigation into such crimes.

“Our homicide unit is working tirelessly to get more information on who was involved in this,” said Cincinnati Police Lt. Steve Saunders. “At this point, we need as much information as possible. She was an innocent victim in this.

“Just a kid who was inside her home. Who does this?” he asked rhetorically. “This is appalling to the community.”

Alexandrea, a fourth-grader at Mount Auburn International Academy, was shot and killed after three to four men stormed into the home she shared with her father and her siblings in the 2200 block of Burnet Avenue on Jan. 18. Her dad, Alex Thompson, told Fox 19 Wednesday that a man held a gun to her head in front of him after the assailants had asked the other children in the house where the “weed” and money was. Thompson, 39, who was shot four times when he struggled with the gunman, denied to Fox 19 that he knew the men. He said also said he did not know why men would storm into the home.

“Why? Why?” he said in the interview. “Why would you bring my daughter upstairs? You could have just went and pointed the gun at me.”

Thompson said he was shot when he struggled with the assailant to get the gun, which was the same time his daughter dove behind him and she was shot by a bullet that passed through his body and into hers. He said he thought Alexandrea would run from the room. After he was shot, he ran out of the home and across the street and banged on his neighbor’s door. The neighbor made the 911 call to report the shooting.

The caller said Thompson told her that he thought his daughter was shot and still in the house, “but he’s not sure.”

On Wednesday, Thompson told Fox 19 he wasn’t sure if the attack was random or if they had the wrong house: “Who tries to rob somebody who’s got nine kids?”

It’s the innocence lost, in part, that has pushed city leaders and at least one business owner to push a reward for information leading to an arrest in the case to at least $12,500. Mayor John Cranley and Council member Christopher Smitherman each added $750 from their campaign funds to bolster the $1,000 Crime Stoppers reward, bringing it to the maximum $2,500 that the group can provide for information. In addition, restaurateur Jeff Ruby announced on Twitter he was offering $10,000 to “get this child killer off the streets.”

Rev. Peterson Mingo and other outreach workers with the city’s Office of Human Relations have been involved in several community marches, have handed out dozens of leaflets to neighbors and folks walking down the street in the days after the brazen shooting. But he said Thursday the groups are holding off on further marches until after Alexandrea’s visitation set for Friday and Saturday.

If you can information about Alexandrea Thompson’s death, call Crime Stoppers at 513-352-3040. Callers can remain anonymous.