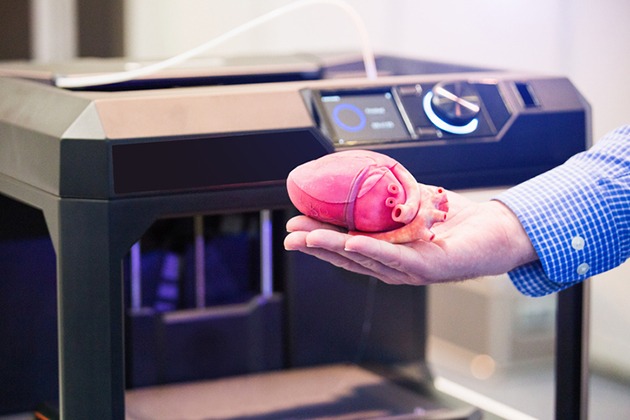 When you think of 3D printing, you probably think of custom plastic pieces created through layering liquid plastic. Since 2015, commercial 3D printing has come a long way to include leaps like 3D printed concrete structures, metal #D printing, and most importantly, something called bioink. Bioink is exactly what it sounds like; it is ink that is derived from living organisms, mostly seaweed, which can theoretically serve to recreate organic structures. These organic structures could include things ranging from complex organs like hearts and livers down to human skin. This technology is absolutely amazing, these organs could help end the immense shortage of organs available for transplant. The technology is still progressing, but every day scientists and researchers are working tirelessly to create the next major breakthrough. Learn more about how you can get involved in the organ donation process at LifeCenter.

The reason that this industry has been exploding is because there is an immense need in the market for new organs and skin. Organs are immensely important for transplants, with over 635,000 Americans perishing from heart disease in 2017. The heart is one of the potential organs that could be a great candidate for 3D printing. Not only is there a great need for hearts, but the muscle can be easily built as it serves as a muscle more than an organ by pumping blood throughout your body.

In 2017, there were over 114,000 people on the national transplant waiting list, 83% of which were waiting for kidneys. The waiting list is constantly growing, every 10 minutes another person is added to the list of those anxiously awaiting a potential organ donor. Unfortunately, that list is balanced out by the fact that every day 20 people die waiting for a transplant. The good news is that every organ donor can donate up to eight different organs, and can potentially save eight different lives. With the massive gap between organ donors and the organs needed, science has been scrambling to come up with solutions.

3D printing is a detailed and fascinating science that has grown immensely in the past five years. Initially only capable of basic machining and simple plastic printing, 3D printers were created as a way for people to create custom made complex objects that they could design themselves. With advances like bioink and advanced bioprinters, 3D printing is quickly jumping into the world of health and wellness.

One of the biggest areas for growth when it comes to 3D printing is in printing human skin cells. This technology would have immense implications in the science community as well as the animal rights communities. Many lotions, sunscreens, and makeups are tested on animal skin; this process of printing human skin would completely end the need for animal testing. 3D printed skin can also be easily utilized in tissue donation cases, leading to a completely new world of possibilities in the world of tissue and organ transplants.

3D printing has been touted as one of the biggest leaps in technology that we have seen in years, and that claim could be well founded. The next decade of advancements will be telling, but we could very well see a 3D bioprinter in every hospital around the world. If you would like to learn more about how you can get involved in the organ donation community, contact us or register as an organ donor here!