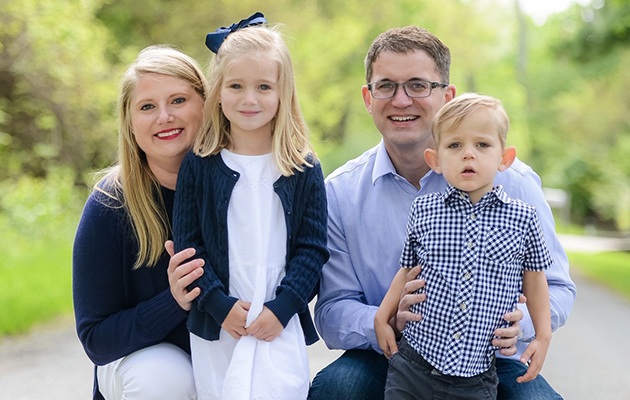 Three years ago, Elizabeth and her husband Greg Rogers got the news that would change their lives. At Elizabeth’s 20-week ultrasound for her second baby, her doctor gave her the news that every parent fears. There was something wrong with her baby’s kidney, and the doctors wouldn’t know the severity of the issue until her baby was born. Elizabeth and Greg knew that there was an uphill battle ahead of them, but they had faith that their path would unfold as it should. Henry’s story is an inspirational tale of how one child’s need for a kidney helped turn two complete strangers into a family.

Three years ago, Henry Rogers was born at Good Samaritan and was quickly transferred to the NICU unit at Cincinnati Children’s Hospital. From the moment Henry entered this world, he had to work harder than most children. Henry had kidney failure from the moment he was born and he was immediately rushed off to the NICU unit to start receiving dialysis treatments. Henry stayed in the NICU unit at Cincinnati Children’s Hospital for four and a half months where he received dialysis treatments and round the clock care. The struggles continued when Henry came home. Every night, Elizabeth and Greg had to be home at 6:00 PM to start Henry’s dialysis treatment, and it became extremely limiting and isolating for their family.

These first few months were immensely stressful for Henry’s parents, and Elizabeth leaned heavily on her nighttime bible studies for support. Her bible study did much more than just provide her with strength, it ended up being a solution to all of their problems. A woman named Amy joined Elizabeth’s bible study, and on that night, Elizabeth shared a bit about Henry’s health situation. Amy immediately knew that this was the reason that she was at this particular bible study and she volunteered right away as a potential donor. Amy, a complete stranger, was completely and totally willing to give her kidney so that Henry could live a full life. The night she heard about Henry’s need for a kidney, Amy called the hospital to set up an appointment to start the testing process to see if she would be a match.

Elizabeth knew that Amy’s selfless act was a longshot, but to Amy, there was no doubt in her mind that she would be a match. The testing process dragged out, and months turned to a year, still with no real resolution in sight. That all changed exactly two years to the date of Elizabeth’s fateful 20-week ultrasound. Amy came over to the house and told Elizabeth and Greg that it was official, she was a match and she was going to give Henry a kidney. To Elizabeth it was all surreal, “You are holding your breath the whole time, it wasn’t real to me until the transplant actually happened.”

Amy is now a welcome sight at the Rogers’ household and she has become a part of their family. Her Selfless gift meant that Henry no longer had to be chained to his dialysis. Elizabeth says it best, “Before he got his new kidney he barely talked, and now he can’t stop himself!” Henry is happy, healthy, and is growing into a fiercely independent little boy. Elizabeth says that her strength in her religion really helped her through the process and that Jeremiah 29:11 has been their family’s motto in this process.

“For I know the plans I have for you,” declares the Lord, “Plans to prosper you and not to harm you, plans to give you hope and a future.”