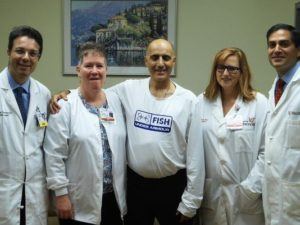 Brian Martin woke up feeling really bad Friday, Sept. 16. He called on friends and prayed to God for some encouragement.

A genetic liver disease threatened his life. Martin had been waiting more than two years for a life-saving liver transplant. He was hanging on to fading hope. There was no hint of how his prayers would be answered that very day. The phone rang at about 10 a.m. His wife, Sheri, answered. She handed it to Brian, who was outside trying to distract himself by cleaning out the car.

“My wife said, ‘It’s for you.’ She had this look on her face like she didn’t want to take the call, so I took the phone,” Martin said. “She said, ‘This is Joannie. We think we might have a liver for you. We need you to come down to the hospital tonight, but don’t be too excited because we never know until we know.’”

Joannie Foster is an RN and patient care coordinator for the liver transplant program at the University of Cincinnati Medical Center. She is his coordinating care nurse. Typically she is coordinating care for 75-100 patients at a time. It’s her job to be their voice, to be their advocate. She had given him so much hope and encouragement during the process, he was shocked by the lack of excitement he sensed from her during the call.

“I’m always afraid to give that false hope,” Foster said. “We never know until we see it, biopsy it, and everything goes. There have been times we called patients in and had to send them back home because the liver wasn’t good. I’m always scared to say this is it, just in case.”

Dr. Shimul Shah, director of the liver transplant program at U.C. Medical Center, said there is so much that goes into deciding who gets on the donor list, their position on the list, and who gets a liver when one becomes available he could not begin to explain how it works. Shah then gave the best explanation of the process he could offer.

“There’s a donor organ and then you have to match it up with the right recipient,” Shah said. “So the donor organs are allocated based on your blood type. The people on the waiting list are in order based on their MELD score.”

The MELD score is based on numbers from the lab tests of the patient. Shah said it doesn’t matter how long they’ve been on the list, where they live or what color they are. He didn’t know Martin waited more than two years. The only thing that matters is their MELD score. It tells them the patient’s risk of death without a transplant.

“Brian was close to the top,” Shah said. “The liver he got was one of those, for whatever reasons, wasn’t right for the couple people ahead of him so it came to him. He was definitely sick.”

So sick that morning, He sent up prayers and sent out emails seeking encouragement, recalled his pastor, Erik Carlsen, Northeast Community Church in Symmes Township. Faith in God, support and encouragement from his wife, Carlsen, and especially Nurse Foster often gave him the hope he craved when feeling sicker, lost, or confused. Like the time Foster told him “the right time will come, it will be the right liver for you.”

“I said just give me some encouragement, I can’t make it through today,” Martin said about prayers he shared with Pastor Carlsen the morning the call came. Email responses offered him the encouragement he sought. He said “Thank you God.” A couple hours later, Joannie called with the transplant.

“Hold on God, I only asked for a little bit of encouragement today, you’re giving me the whole farm.”

His time had come; they had a liver for him. Though she hid her excitement during the call to Martin, Foster was very excited. She ran around telling everybody they had a liver for Brian. Thinking he was in for a week or more stay in the hospital, with hours until he was supposed to check-in, he went to get a haircut.

“I went to Great Clips and got my haircut,” Martin said. “The barber said what are you doing today? I said I’m gonna get my liver transplant. Went home, paid the bills for the month. We went in and it went just like Joannie said. God carried me through the whole process.”

Martin arrived at the hospital near dinner time just as Joannie had instructed that Friday.

She wanted to be there, but her shift had ended and she had children of her own to care for. All night long, while being prepped, still no one told him if it was the right one. Even as he was taken into pre-surgery room, the transplant surgeon, Dr. Flavio Paterno, told him they didn’t know yet, but would know soon.

“Within an hour they gave me an injection that put me to sleep,” Martin said. “I woke up and it was done, 14 hours later, on my mom’s birthday.”

His mom’s birthday, but Brian Martin received the greatest gift of all; the gift of life. It is a pretty good gift for his family, for his wife and for his 16 year-old son and 13 year-old daughter.

“I am just thankful for God,” said Sheri Martin, his wife. “It’s going to be nice to have him back to being Brian.”

Besides being there for his family, Martin wants to help others. He hopes sharing his own story of prayers answered through the work of the team at U.C. Medical Center will inspire people to donate. He fought back tears thinking of the local man who not only donated his liver to Brian, but his heart, lungs and kidneys to save the lives of others. He hopes to one day meet the family of his donor. For now he gives thanks to God while trying to work out the magnitude of the gift he received.

There are 150 patients on the U.C. liver transplant waiting list. Shah said 10-percent die before they get a transplant – locally and nationally – and liver transplant patients have the highest rate of life or death. Martin asked Foster what having donors would mean.

“We’d get the list cleared,” Foster said. That is the challenge to educate until saying no is not even an option. “The hardest is the ones who don’t even make it to transplant.”

“I don’t think the common person realizes how many people are there to save someone’s life,” Shah said. “If only you could see the operating room during the surgery.”

Shah came to Cincinnati from Boston where there were six hospitals with liver transplant programs. Here, the U.C. liver transplant program is the only one available to patients in a wide geographical area around Greater Cincinnati. Diana Lara, hospital spokesperson, cited statistics that U.C. treats the sickest patients and maintains the highest success rate compared nationally. She credits Dr. Shah for patient advocacy efforts to get patients on the list. He credits the team of “countless number of people” for the amazing results.

“It’s very gratifying. It’s the best job,” Shah said. “We have a great team. I try to convince everyone and make them believe we are the best program. I think people are starting to realize it. We’re seeing people come from Florida, from different parts of the country just to come here.”

The team still asks Shah why they are the choice of patients from all around the country. Borrowing a theme from the 2016 Boston Red Sox, he responds: “Why not us? We’re better than everyone else. Start believing it. Great people make the team.”

The team was doing 36 transplants in a year when Shah arrived. They’ll do 105 this year as the program continues to grow and save lives. They’re focusing on patient-oriented care and connecting patients to help one another via Facebook. Martin believes. He received new life with a liver transplant and was home “doing well” in four days. He credits hope and great care from Dr. Shah and the U.C. liver transplant team.

“Dr. Shah is not just a typical doctor running through case files,” Martin said. “He cares about each patient individual, he responds, he doesn’t have to. What doctor does that?”