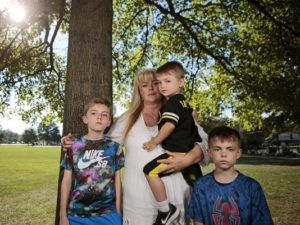 Late on Aug. 23, the city of Cincinnati thrashed around in the fever spike of carfentanil. Shawn Ingram sat in a hospital room holding the hand of her unconscious daughter. A breathing machine hissed and sighed. Ingram wept with the realization that an overdose had ended her troubled child’s life. But it might save another’s.

“I knew she had marked herself an organ donor on her driver’s license,” Ingram said nearly a month after her daughter’s death. “I know she would want to do it. That’s the kind of person she was.”

So amid the devastation of her daughter’s overdose from heroin, likely laced with the elephant sedative carfentanil, Ingram released her daughter’s hand just long enough to sign papers to remove Heather Ingram’s kidneys and liver for transplant.

In Cincinnati and across the country, organ donations have held steady for more than a decade while the number of people on the waiting list for a new organ has grown. One perverse chalk mark on the upside of the opioid epidemic has been the creation of more organ donors. LifeCenter, the regional nonprofit that coordinates organ donation in southwest Ohio, southeast Indiana and Northern Kentucky, has been tracking the local increase.

“We’re seeing more people who are obviously dying from heroin overdoses than we’ve probably ever seen in the past,” said Missy Holliday, organ operations director for LifeCenter. “And because of that, the fact that they’re not surviving, what it’s leading to is an increased number of families that we’re speaking to, and many of them are saying yes to donations, which is amazing.”

LifeCenter reports that last year, 16 of the 57 donors were victims of heroin overdose. This year, as of Sept. 20, is holding the same pace: Of 47 donors in 2016, 12 died by heroin overdoses. Those dozen people donated 17 kidneys, 12 livers, two hearts and one lung.

A misperception persists that death by needle-drug overdose automatically disqualifies an addict from organ donation. This is not true.

“The reason it’s not an automatic rule-out is because people are dying every day on the waiting list,” Holliday said. “They may only have three to five days to live. You’re trying to balance that risk versus the benefit: OK, is it worth the risk of this patient contracting a possibly communicable disease or take the risk that the person dies because we didn’t take a risk on this organ?”

Once a donor’s body clears the initial hurdle, Holliday said, evaluators look at the donor’s age, height, weight and overall health. If the donor passes those reviews, then the donor is typed to see whether there is a match with someone on the waiting list.

A potential recipient then is given the health information about the donor – including any needle-drug abuse — within the limits of federal privacy law, said Diana Lara, spokeswoman for UC Health. The UC Medical Center performs organ transplants.

“In any type of transplant, the patient is always told the background of the deceased, and the patient has the choice to accept or pass on the organ,” Lara said.

When Shawn Ingram thinks about whoever received Heather’s kidneys and liver, she wants them to know that Heather, 32, was her only child. Heather loved her four boys, all under 11, and she loved animals. She had struggled with an addiction that started nearly two years ago with prescription opioids to treat a broken cervical vertebra.

In early August, Shawn Ingram said, Heather went into rehab for three weeks then came home. “I watched her like a hawk,” Ingram said. “I was just so grateful. She was doing so well. I kept thanking God, that my prayers had been answered.”

On the night of Aug. 23, first responders raced all across the city chasing the wave of carfentanil-fueled overdoses. At home in Eastgate, Ingram felt safe enough to leave Heather with the boys, supervised by an adult friend, for a quick trip to the grocery. She said she had not been gone an hour.

But in that time, Heather slipped out, caught a ride to a dealer, made a buy, then rode over to a Subway restaurant on Galbraith and Plainfield roads in Deer Park, where she went into the bathroom and locked the door from the inside. Ingram said police later told her that no one in the restaurant had a key to the door, and it had to be broken down to reach Heather, who by then was not breathing.

When Ingram reached her daughter’s side at Jewish Hospital, a ventilator worked to push air into Heather’s lungs. Her eyes were fixed and dilated. An outreach coordinator with LifeCenter approached and gently asked Ingram about organ donation.

Ingram said yes. A friend, Hebron plastic surgeon Deborah Sillins, came to the hospital and walked with Ingram to escort Heather, still on the respirator, to the operating room. Ingram kissed Heather good-bye and let go of her hand.

Today, the fever spike of carfentanil has dropped, although the chemical remains a dangerous presence in Cincinnati, leaving police officers and emergency medical technicians in tears at the ruin of addiction.

LifeCenter provided Ingram some mementos: a teddy bear with an imbedded chip that plays a recording of Heather’s heartbeat, a silver pendant with Heather’s thumbprint.

Ingram now has custody of her four grandsons. She is an insulin-dependent diabetic and now on disability. The fight to save Heather cost every penny that Ingram had; she used money set aside for her car payment to retrieve Heather’s ashes from the crematory.