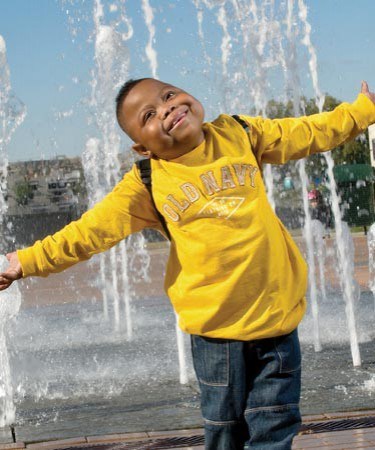 “Tater” was born on October 28, 2004 in Milwaukee, WI and was born prematurely at 25 weeks. He wasn’t fully developed at birth, so he suffered from many medical complications including an infection called Necrotizing Enterocolitis (NEC). He underwent a bowel resection that left him with 58 centimeters of his small intestine and then was diagnosed with “Short Gut Syndrome” requiring him to need TPN and lipids to supply all daily nutrition, which caused End-Stage Liver Disease.

By the time he was three years-old, he had undergone a Patent Ductus Arteriosus Ligation (PDA) to correct a condition that leads to abnormal blood flow between the aorta and pulmonary artery, two major blood vessels that carry blood from the heart. He had also had a procedure called a Cricoid Split to widen and correct his airways, then was transferred to Cincinnati Children’s Hospital and placed on the Multivisercal Transplant List.

We waited for several months before the first offer for transplant came in early 2008, but unfortunately that didn’t work out, and we had to wait once again. Finally, Tater received his transplant of small bowel, liver and pancreas on April 15, 2010.

Although Tater has been hospitalized for much of his life up until his transplant, he still has quite a personality, and he’s such a fighter. Tater is a very active child who has brought joy and laughter into so many lives. He is truly an example of why people should register to become organ and tissue donors. He is alive today because someone said yes to donation and gave the greatest gift. Our lives will never be the same, and this is only just the beginning.