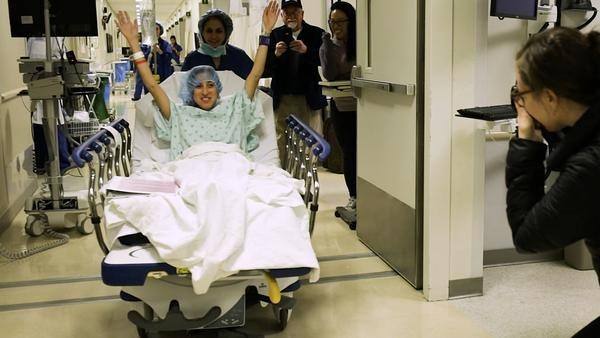 In March of 2019, the elite surgical team at Johns Hopkins Hospital in Baltimore, Maryland performed the world’s first kidney transplant from a living HIV positive donor. Built on the knowledge and skills acquired by surgical teams in South Africa who pioneered HIV positive transplants, this surgery marks a major landmark for organ donation. Dr. Christine Durand, an associate professor of medicine and oncology at Johns Hopkins estimates that there are about 10,000 HIV positive patients on the national waiting list. By implementing and practicing HIV positive transplants, a huge weight could be lifted off the entire transplant system. If you would like to learn more about how you can get involved in organ donation, visit the LifeCenter website today.

Over the past year, Nina Martinez of Atlanta has been working to become a living HIV positive kidney donor. Her journey began when one of her friends who is HIV positive reached out for support, looking for a potential kidney donor. Martinez quickly reached out to Dr. Dorry Segev, a prominent surgeon at Johns Hopkins who helped solidify the HIV Organ Policy Equity act that lifted a 25-year ban in the U.S. on transplants between HIV positive patients. Martinez then began undergoing testing to see if there could be any adverse effects of organ donation from living HIV positive donors. This process took nine long months, during which her friend, unfortunately, passed away.

Her friend’s passing did not hold Martinez back, if anything, it inspired her to work harder to get her message to the public. She decided to move forward with the procedure, but instead of her friend, she wanted to donate her kidney to an HIV positive stranger.  Martinez said “Losing somebody to both HIV and kidney disease was very hard, but my late friend was very excited to embark on this journey together. Really I just carried on in honoring him.”

Martinez wanted to prove that HIV positive patients are no different from anyone else stating, “For me, it was just kind of an opportunity to be the same as anybody else. I really wanted to do something to kind of jolt people’s perceptions.”

With over 110,000 people on the waiting list and an estimated 10,000 of those being HIV positive patients, this surgery could have immense implications on the availabilities of organs on a national level. This surgery is still in its infant stages, but this technology has the capacity to reduce the organ shortage by about 10%. According to Dr. Niraj Desai, the surgeon who cared for the recipient of Martinez’s organs, kidneys from living donors tend to last substantially longer than deceased donors.

With 20 people dying each day on the waiting list, every advancement helps immensely. The major advancements done by Dr. Segev and the whole team at Johns Hopkins Hospital have the potential to save thousands of lives. If you would like to register as an organ donor or want to learn more about how you can get involved, contact us at Life Center today.