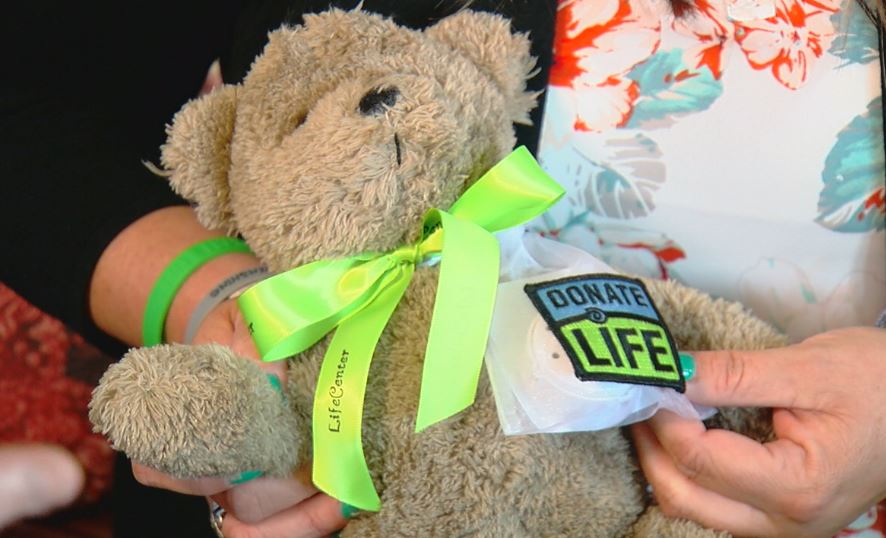 DELHI, Ohio (WKRC) – Debbie Wieland and her family spend a lot of time in their dining room making “Heartbeat Bears” for the families of organ donors.

“The ribbon has to lay just right,” Debbie Wieland said as she made a bear. Wieland makes the bears in memory of her son, Ricky. He was an Army National Guardsman who died in a car crash in 2010. Ricky was an organ donor and his organs saved seven lives.

“He loved the military,” Wieland said. “He was a great kid. He was a stinker but he could light up a room with his smile. He loved to have fun… He donated all the major organs, he donated leg bone, tissue, ligaments, his corneas, his ear bones so someone could hear.”

Each bear has a bow marked “Life Center” and a recording device to record the donor’s heartbeat.

“You never get tired of hearing that,” Wieland said of Ricky’s heartbeat.

Three years ago, Debbie and her husband traveled to Rochester, New York to meet the man who received Ricky’s heart, Claude Brown. The meeting was recorded by the University of Rochester Medical Center and Ricky’s heart beating inside Claude was recorded and given to Debbie.

“It has brought us such peace knowing and meeting the man that my son has kept alive,” Debbie said. “After meeting Claude, it was like I have got to find a way to make this happen because it brings us so much comfort. It’s healing for us to help other families.”

Debbie secretly recorded the heartbeat of her grandson during an ultrasound when her daughter was pregnant. She sewed the recording into the paw of a Build-a-Bear and gave it to her daughter. Between that and meeting Claude, the idea for the heartbeat bears was born.

Debbie keeps a bear she made from Ricky’s military clothing on her mantle. She had given several members of her family the same bears. The recording of Ricky’s heartbeat sits next to her bear.

“It’s music to my ears,” Debbie said as the recording played.

Debbie and her family consider making the heartbeat bears a ministry. The Life Center distributes them to the families of organ donors that want them. Amanda Garcia’s daughter, Kaylie Jackson, died in a crash on prom night last Spring. She also received a bear.

“It’s comforting. It’s something that I’ll always have of her,” Garcia said.

Debbie Wieland wants other families to feel the comfort she does from hearing her son’s heartbeat.

“These are in memory of my son and I want whoever gets one to know each one is made with love and care,” Debbie said. “Every family should have their loved ones heartbeat.”

Debbie and her family donated the first 55 bears to the Life Center in Ricky’s name. Since she started making them in 2015, more than 450 bears to have been given to families. Neither the Wielands nor the Life Center profit from the bears.