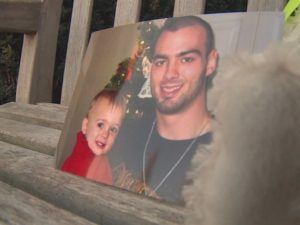 LOUISVILLE, Ky. (WHAS11) — A Northern Kentucky mother who lost her son to a heroin overdose is finding some comfort knowing his organs helped save a man’s life.

“I got a phone call from a police officer in Cincinnati, stated that I needed to go to the hospital that it didn’t look good,” said Ramey.

Registered Nurse Ruth Ramey got the call in March. She would soon find out her 26-year-old son Chris Gillum was brain dead. He had overdosed after trying heroin for the first time.

“It was his first time and that’s probably why it killed him so quickly and so fast,” said Ramey.

“It’s something that you can’t describe and there is nothing anybody can say to you to understand or make you feel better because there’s just no words to describe it,” said Ramey.

In the midst of her grief, Ramey was told her son had signed up to be an organ donor on his license.

“It just so happens there was a 61-year-old man with liver cancer and he (Chris) was able to donate his liver to this man, and so he has time to spend time with his children over the holidays, so a piece of Chris is still living on,” said Ramey.

Kentucky Organ Donor Affiliates’ Jenny Jones says Chris is part of a growing number of organ donors who have died from heroin overdose across the nation.

In Kentucky, the number has remained steady, with roughly 20% of organ donations coming from overdose situations over last few years.

“A lot of people don’t realize that people who have had a drug overdose could actually be an organ donor, they just assume that they can’t because maybe they’ve done drugs, but of course the time period would pass where all those drugs have left the system,” said Jenny Jones, KODA Special Projects Director.

Jones says in many cases, people who die of overdoses are young, and their organs are in relatively good health. She says the organs are screened for transmittable diseases before transplant.

Ramey now holds tight to keepsakes of her son and finds comfort knowing because of him someone else is living.

“Of course, I wish my son was still here, but knowing that somebody else can have a loved one home for the holidays, spend more time, have years and years of life with them it means a lot, a whole lot,” said Ramey.

Ramey says it feels too soon right now, but she would eventually like to meet the man who got her son’s liver. She encourages all families to have discussions about organ donation.