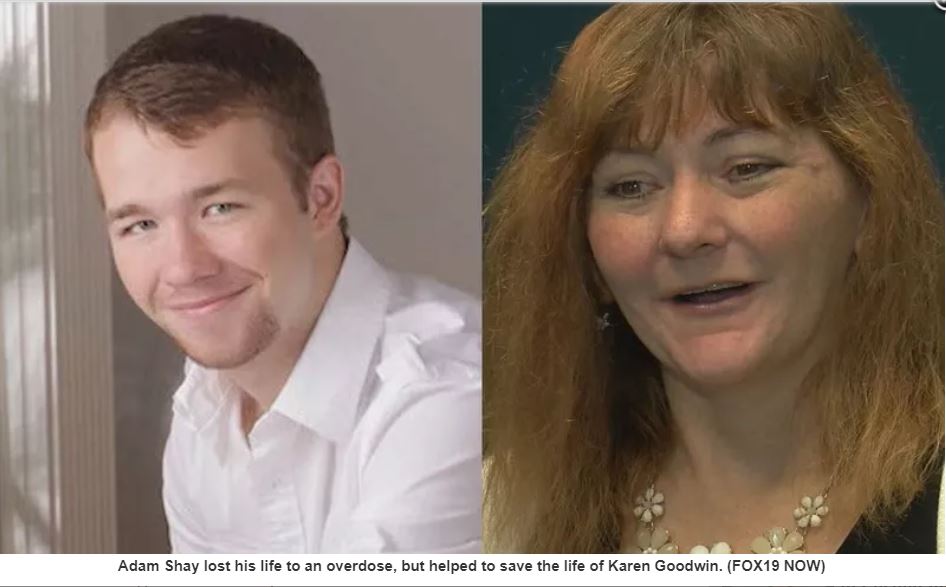 Let’s say, for example, you’re a patient who is desperate for an organ transplant. You finally get the call you’ve been waiting for, but there’s a catch — the donor, whose organ could save your life, was a heroin addict.

Adam Shay, 21, was a musician, artist, and athlete. He was also an addict.

“He had been sober a year and engaged to be married,” said his mother Marlene.

Marlene said that, for whatever reason, her son chose to use again after three years in and out of rehab. Friends and first responders kept him alive when he overdosed and got him to the hospital, but it was too late.

On that same day, Karen Goodwin — sober for more than 13 years — got the call she’d been desperately waiting for.

“I knew it was my last Christmas, my last New Year unless I got a transplant,” she said. “I was that bad.”

Goodwin was weak and losing hope she’d get the kidney and pancreas she needed — she was doing dialysis four times a day.

Goodwin was grateful and nervous after hearing the person ahead of her in line for a transplant had rejected Shay’s organs. They were labeled high-risk due to his known heroin use with the potential for exposure to hepatitis.

Goodwin suffered from diabetes her entire life, but was also a long-time drug and alcohol abuser, including heroin.

“For all intents and purposes, I should have been where he was,” said Goodwin. “There’s no reason, but by the grace of God I got through addiction.”

Shay’s story is not unique. It’s becoming the norm across the U.S. Fortunately for Goodwin, he had already made the choice earlier to give the gift of life when his time came, registering as an organ donor.

According to the United Network for Organ Sharing, or UNOS, the number of donors nationwide who died of drug overdoses has increased in recent years:

A total of 34,768 organ transplants were performed in 2017 using organs from both deceased and living donors, according to preliminary data. This total marks the fifth consecutive record-setting year for transplants in the U.S.

“Ohio is one of the most affected states in the country,” said Dr. David Klassen, the Chief Medical Officer at UNOS.

He said Ohio and West Virginia may be the epicenters of the opioid epidemic, with more people dying from drug overdoses this past year than ever before.

“The silver lining, if you will, is that organ donation has increased,” said Andi Johnson, the Community Relations Director with the Life Center in Cincinnati.

She said that despite being labeled high- or increased-risk, those organs are saving lives more than ever.

“I also think it gives the families of the people who’ve unfortunately passed away due to overdoses, it’s giving them some solace to know that, there is something horrible that happened in this person’s life, and maybe they made some bad decisions, but in their death, they were able to help other people,” said Johnson.

The Life Center fields calls 24/7. The news of one life ending could mean up to 60 lives saved from tissue and organ donation.

“People can be healed through the gift of bone, tissue, cornea, tendons — that can help upwards of 60 people,” said Johnson.

Organs are screened for communicable diseases, then evaluated to see how well they function (if they’re even eligible for transplants). If it’s a go, they’re still labeled, “high” or “increased risk.”

People waiting for a transplant sometimes have no other options. They get educated by the surgeons about the organ beforehand and learn whether the drugs are no longer in the person’s system. Organs can still be compromised — the surgeon tells the patient the all of the potential risks.

Age, the cause of death, size of the organ, blood type, and condition of the patient are all considered. If they decline to take the organ, then it’s anybody’s guess when the next opportunity could come up. So is it worth risking a longer wait?

“There’s a lot of tragedy behind it, but it does result in transplants for people who might not otherwise have the option of being transplanted. The opioid crisis accounts for part of it, that accounts for about 40 percent of the increase over the last few years, but that leaves 60 percent of the increase is really due to the hard work of procurement organizations, transplant centers, and I think acceptance by the general public as well,” said Klassen. “In terms of safety, I think transplants from patients who do die of opioid overdoses, as a general rule, are very, very safe. In that context, drugs leave the body very, very quickly, so that’s not really an issue with respect to doing a transplant, so, those sorts of drugs are long gone by the time the transplant occurs.”

The Life Center reports that at least 1/3 of the new organ donors over the last couple years are from opioid overdose deaths.

“We have over 117,000 people in this country now waiting for life-saving transplants,” said Johnson.

In a way, this uptick in organ donation is helping to re-write the overdose victim’s end-of-life story, which can also help those families in their healing.

UNOS estimates more than half of adults right now have registered to be organ donors. If you are not an organ donor, your family can still make that decision for you.